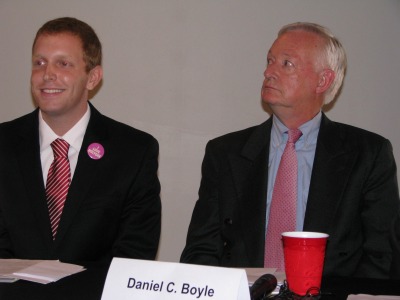 Seen here (left to right) are Holyoke mayoral candidates Alex Morse and Daniel Boyle, who appeared last week at a forum hosted by Open Square.
Reminder Publications photos by G. Michael Dobbs
Sept. 14, 2011 By G. Michael Dobbs Managing Editor HOLYOKE — The four candidates for Holyoke’s mayor met last week for a thoughtful and fireworks-free discussion of issues at which the creation of jobs was the predominant theme. Incumbent Mayor Elaine Pluta and challengers Alex Morse, Daniel Boyle and Daniel Burns asked questions posed by Ellen Cavanaugh, executive director of the Holyoke Boys and Girls Club and Greater Holyoke Director Alex Melendez of the Latino Chamber of Commerce. The event was hosted by Open Square and sponsored by Open Square, the Massachusetts Latino Chamber of Commerce, The Boys and Girls Club of Greater Holyoke, The Holyoke Taxpayers Association, and Citizens for the Revitalization and Urban Success of Holyoke. The forum was taped for replay over the city’s cable access channel and Morse was the only candidate to deliver part of his opening statement in Spanish. The subject of jobs popped up in the answers of different questions through the hour-long presentation. Conducted on the same evening as President Barack Obama’s speech on his jobs plan, Boyle said, “Jobs are on the minds of all Americans tonight.” Burns suggested that to encourage job growth, the city’s commercial tax rate should be decreased and also said he would seek to create a $1 million endowment that could help fund business start-ups. He said it’s “very discouraging” to travel and see the proliferation of new businesses in other communities. He urged the city’s high school and Holyoke Community College to seek out what local employers need in training potential employees. Boyle, who emphasized his background in private business, called for the city to work with organizations such as the Latino Chamber of Commerce, to create partnerships that would result in new jobs. He also said the city turned its back on a proposed Lowe’s Home Improvement store and that “it should take six years for an existing convenience store to get a Dunkin’ Donuts drive-through.” Pluta noted that during her administration, 74 new businesses came to the city, creating 129 new jobs. She added that a committee has been examining the city’s tax structure and will soon be issuing recommendations to lower taxes. Pluta also is interested in establishing business improvement districts to address needs that would be funded by the property owners themselves. “Nothing could be more important at this point than jobs,” she said. She expressed hopes the proposed casino would bring needed new jobs to the city. Morse, who has worked at Careerpoint as a counselor, sees the issue of jobs tied to the quality of education in the city and to public safety. Morse believes tax incentives should be used more to draw new businesses and that the city must streamline its permitting process to address its “anti-business” reputation. He also called for the renovation and updating of the vocational shops at Dean Technical High School and called for the creation of financial literacy classes in the school system. 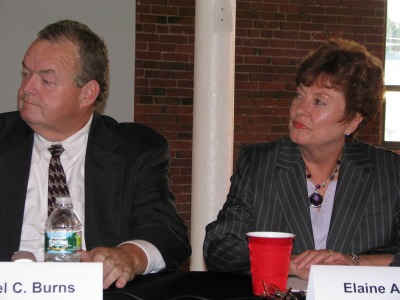 Mayoral candidates Daniel Burns and Mayor Elaine Pluta also took part in the Square One forum.
Reminder Publications photos by G. Michael Dobbs
The city’s poverty was another issue the candidates were asked to address. Pluta noted that her administration has been working on breaking “the cycle of poverty” caused by teen births. She explained that when teens become pregnant they drop out of school, preventing them from receiving the education they need to advance their lives. “We’ve been targeting students so they understand they have choices to make,” she said. Morse sees education as the key to fighting poverty and said, if elected, he would open a Parents Information Center that would provide parents with help and support to keep their students in school. Boyle would establish a larger internship program in the city’s high schools and Burns said that drivers’ education should be offered to seniors at the high school as a necessary job skill. In marketing the city better, Morse said that over the next five to 10 years more and more companies would be looking for “cheap, green renewable energy,” something Holyoke has. “We have everything we need to transform the Paper City to the Digital City,” he said. Morse noted that he was the only candidate “raised in the digital age,” a statement to which Boyle took exception. Boyle said that as a former businessperson he would be the “ideal person” to talk with other businesses on how they could take advantage of the Massachusetts Green High Performance Computing Center. Burns said the proposed casino would be a “major boost” to marketing the city and added that since the hydroelectric dam can’t supply all of the city’s electrical needs, additional green sources must be developed. Pluta said an innovation task force has been looking at ways to spin additional businesses and jobs from the creation of the computing center and noted the development of two solar panel fields. On the subject of involving youth in activities to keep them away from drugs and gangs, Boyle noted his own background as a teen when he helped found a teen center. He said more must be done in maintaining a dialogue with young people and again mentioned an increased internship program. Burns would like to move the Parks and Recreation Department to the War Memorial building, once the Council on Aging leaves to have a facility that could offer more space for youth activities. He would also like to see a program in which teens volunteer at the Holyoke Geriatric Authority. Pluta also noted her experience with starting a teen center, while Morse described his experience as being part of the Holyoke Youth Commission. To watch the full hour online, go to www.crushonholyoke.org.